The Verdict is In


I was overjoyed to be surrounded by so much creative energy and excitement last night at the opening. 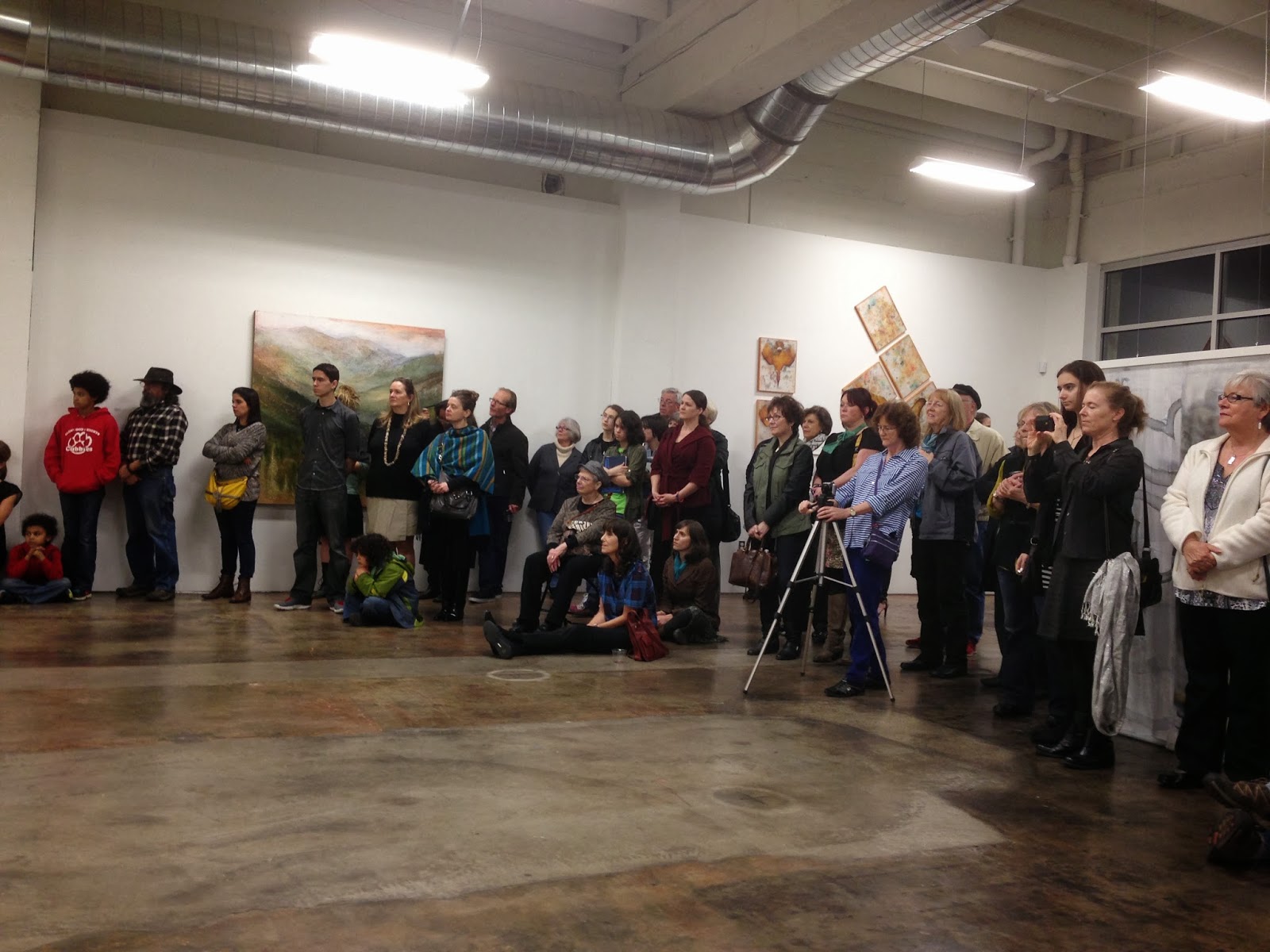 All the artists except K.C. were there (she had a new grandchild to meet!). Also, the dancers performed twice, and were such a joy to watch. There were 5 listed on the flyer, and 4 who performed, so I'm not sure who didn't make it from the troupe.


There was constant activity and conversation - never a dull moment for myself, or any of the artists. Many more people than I expected to come, did. I received so much positive feedback from friends, family and strangers. I was really blown away with the response to my art.


I was also excited about the encouragement people gave me to continue with this style. It is the only thing I've done in a very long time that I could see myself enjoying for a while... and to hear other people as excited about it was affirmation for me to continue. Now, it would be a matter of balancing that with a new baby!

One last note about process: If planning to hang things from sticks - try to use cured wood because fresh wood booooowwwwws.

Opening up the Process

The opening last month was postponed due to weather. This Friday, March 7th is the new and improved opening day of the show! I'll be there from about 5-8 and hope that those of you who can make it will stop in for a variety of local talent and a little snack. Secondly, a few folks have mentioned how nice it would be to see images of the entire process. I wish had an image of every single step, but there were a few steps that I had to be ever-present with and could not also be photographing. Also, while most of the artists really appreciated the lovely daylight in the VOCA space, I had to work at night for the benefit of the product and of my schedule. That said, there was rarely another soul around to snap a photo when I could not. Regardless, I've included here the images that I do have, and will try to include some descriptive details.

Many months ago, I was inspired by this image. At the same time, I was thinking a lot about fabric, sheets, and oriental wall hangings. I stencil spray painted a bed sheet with table lace and projected this image on top of it. I spent an incredible amount of time trying to figure out how to merge the image with the lace stencil (sans overhead projector). I contacted printers, considered screen-printing, even painting directly on the fabric. I wasn't satisfied with any of the options. Then Karen Madsen turned me on to Inkodye, and invited me to Art Lab. 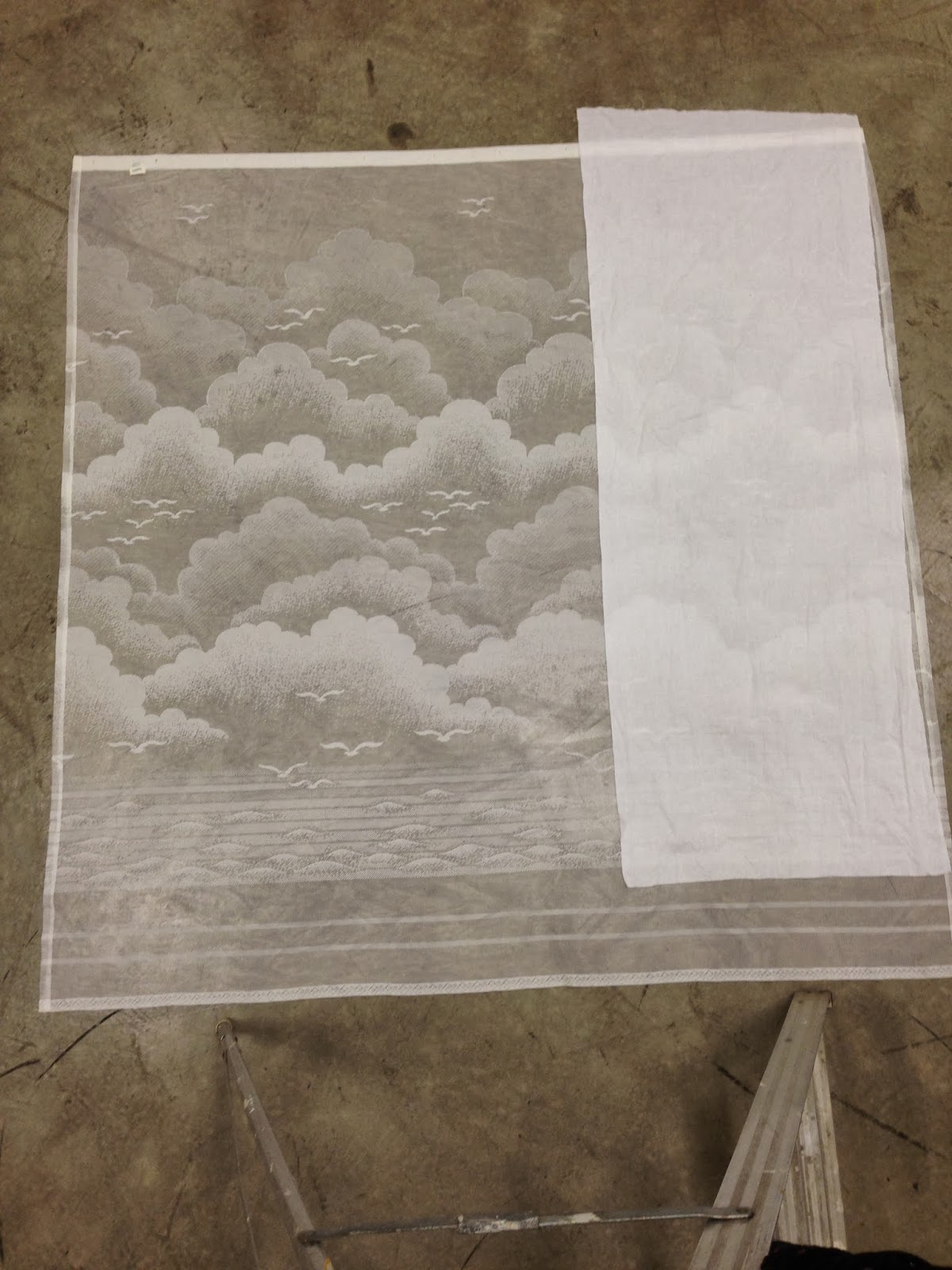 I would have proceeded with the same concept, except I over-bleached my sheet, and it ended up shredding. I had problems (as noted in earlier posts) of getting a higher resolution of the image and I was feeling like it was time to take a new approach.

If I'm going to stencil lace, it needs to be classy. It doesn't need to be hand made for god's sake, but it needs to be different and interesting. I choose my lace first. Shown here is one of the two lace stencils with the material I would stencil on, cut to size. I tested the Inkodye with multiple materials before settling.

I dropped the lace images into photoshop and indesign. I played around with ideas of colors and of what their complimentary images would be. I couldn't get Ruth St. Denis out of my head (the woman above), so I went back to my first love. I decided to do to dyptychs that would compliment each other. I chose Ruth in a (closed) meditation pose and Ruth in an open exuberating type of pose. 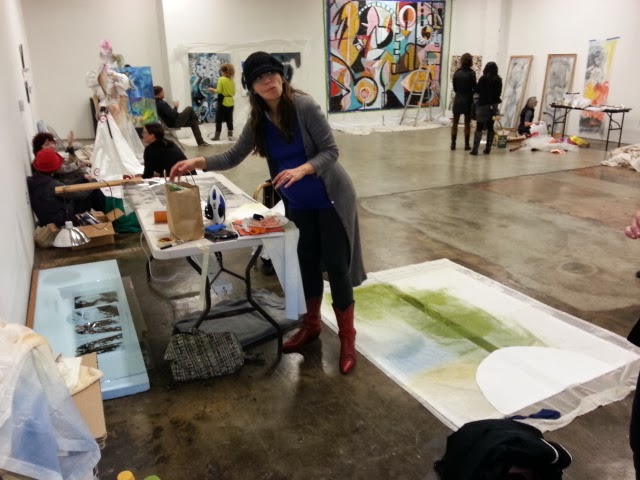 I set up my space and got to work. Here you can see all of my equipment. On the far left is a big blue foam with 8.5 x 11 reverse printed transparencies and a large piece of thin glass.

I would first lay an insoluble material on the foam. Next came the fabric, the glass, and the transparencies on top. The whole unit slid under the table where I hung a double-barrel reptile light for exposure. The iron and other tools on the table were all used for prep. The fabric and lace constantly had to be ironed.

After prepping the exposure, it was time to apply the Inkodye to the hemmed and ironed fabric. This had to be done in low light and I did not get a photo of it. I basically taped the fabric to the table and coated it with an Inkodye : water ratio that I was happy with. 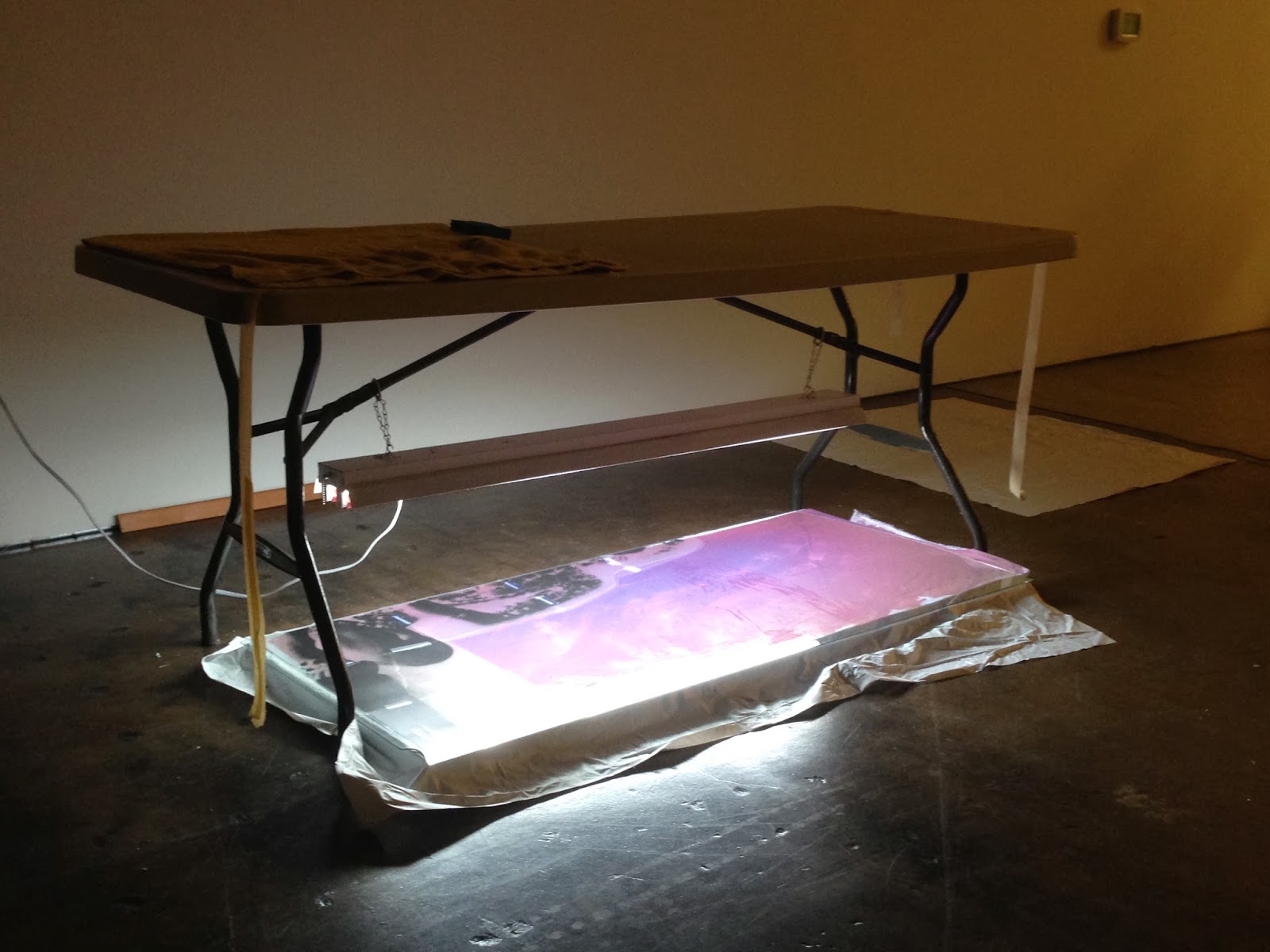 Here you can see the exposure process and set up. The black stuff on the far end of the surface is the image - or rather a negative of the image that has been tiled with 8.5 x 11 transparencies. After my exposure, I immediately submersed the fabric in hot water with Inkodye's special soap. Technically, it should be washed in a machine with hot water, but I had more work to do, and no washing machine handy. I "preserved" it with this technique until I made it home to use the washer. 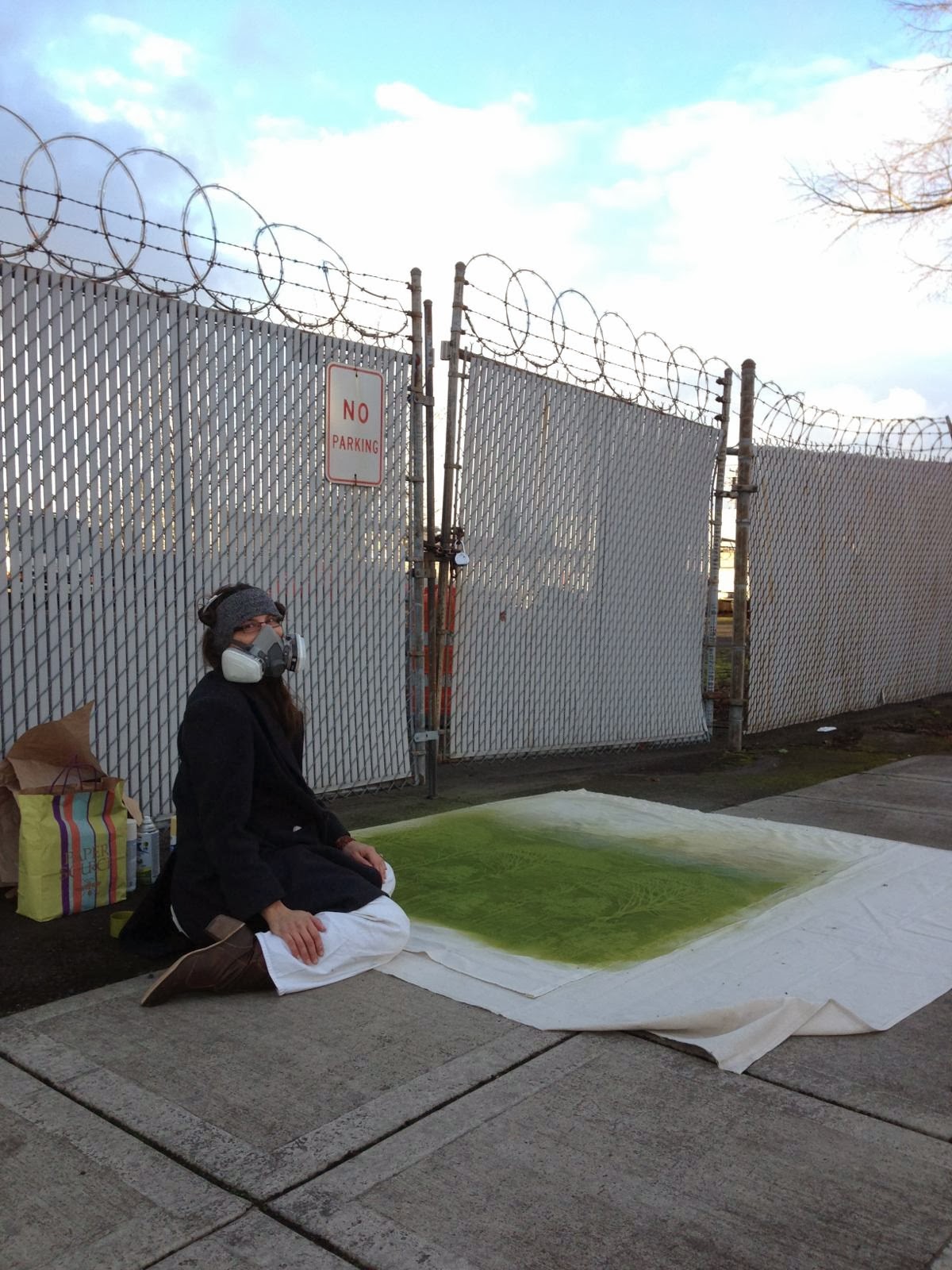 After the image was exposed and washed, it was time to iron it again, and do the stencil. I found the stenciling to be very difficult, because it was hard to gauge how much paint to use when you couldn't easily reference the product. Flipping a corner or an edge to peek would result in a "double-image" which I did manage a couple of times anyway. 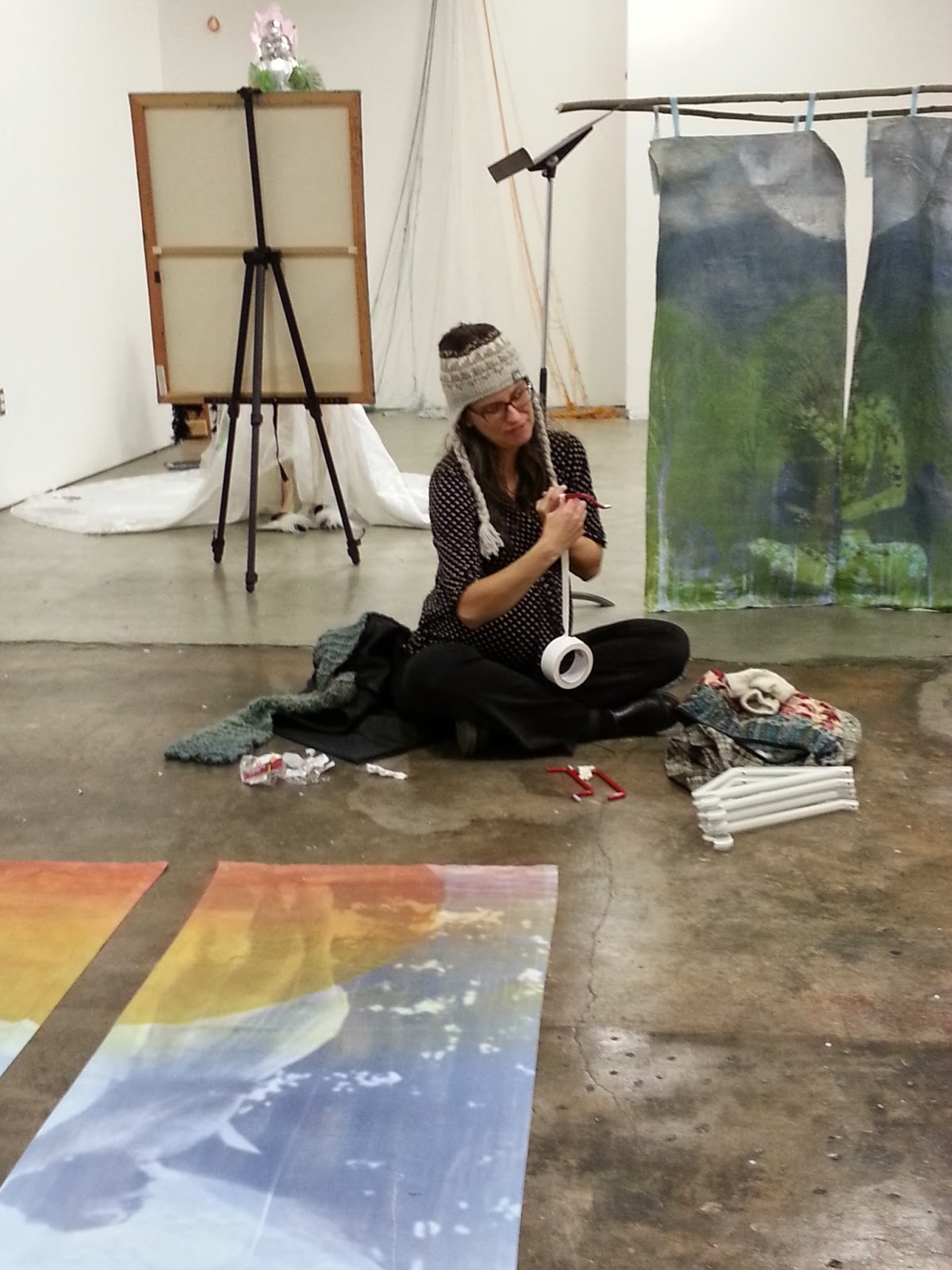 The last step was to iron, trim up any lose ends on the fabric, re-hem any uneven edges, prep the hanging apparatus, and iron again. Here, you can see a mock hanging in the background.

Well, that's the long and the short of it! I hope this little experiment has been as fun and enlightening for you as it has for me. And, I do hope that you can make it First Friday on March 7th. As I mentioned, all of the works are well worth the visit. I encourage you to talk to any of the artists about Art Lab and how it influenced various new approaches to their work.
Posted by sharonimous at 8:13 PM No comments: